Yes, even though it doesn’t seem so, the fondant potato is the star of the show. I tried my hand at this new way of doing potatoes: letting it bubble and boil away in a truck-load of butter till brown and done, and then repeating on the other side. Also, this involves adding a bit of stock towards the end just so the butter doesn’t go burning till black. Each side takes approximately 10-15 minutes; you’d know it’s done with you can stick a fork or knife right through the side easily. You might say it’s just about deep-frying a potato, I think. 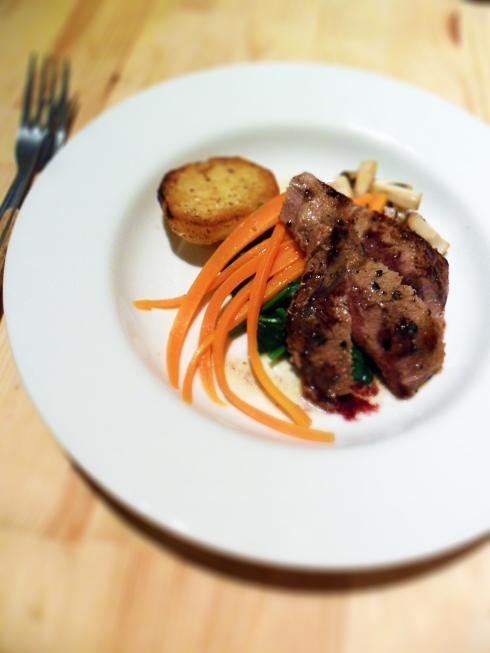 Being the carnivore that I am, I cannot deny that the chunks of juicy red wine flavoured medium-rare beef stole the show. Nevertheless, I’m not limited to simply mashing, boiling and roasting potatoes.

If this recipe works for you, let me know below! END_OF_DOCUMENT_TOKEN_TO_BE_REPLACED
This entry was posted on Wednesday, January 4th, 2012 at 00:20 and tagged with Beef, Butter, Fondant, Potato, Potatoes, Roast and posted in Beef. You can follow any responses to this entry through the RSS 2.0 feed.
« Hollandaise Sauce
New Year’s Dinner 2012 »