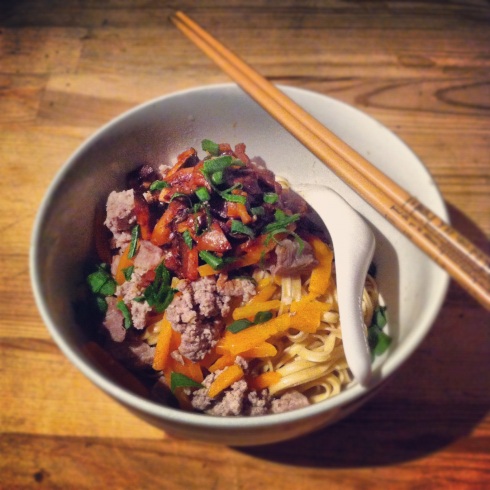 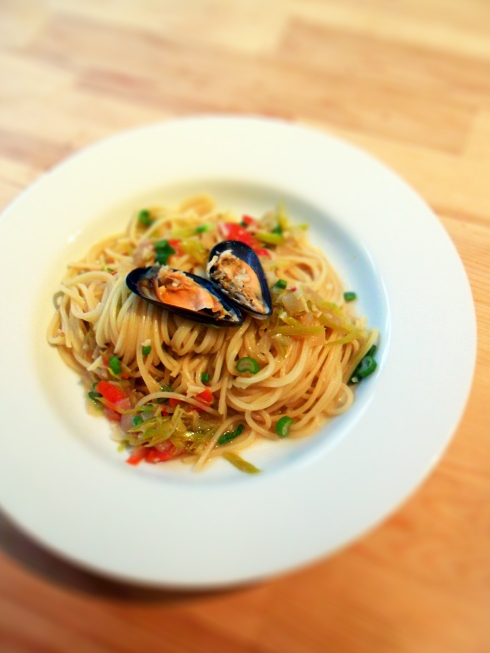 This is the Kuala Lumpur variant of Fried Hokkien Prawn Noodles, similar to the usual Chinese Stir-Fry, but going crazy with the rendered lard and dark soy sauce, the darker the better. 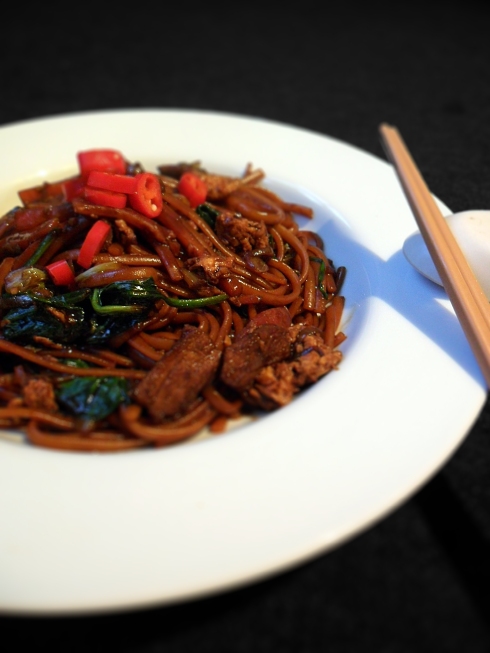 I confess, I am currently obsessed with the ballotine. Rolling meat into a tight bundle and then cooking it makes me happy. It doesn’t help that there is such a sense of excitement when the time is nigh to slice it. 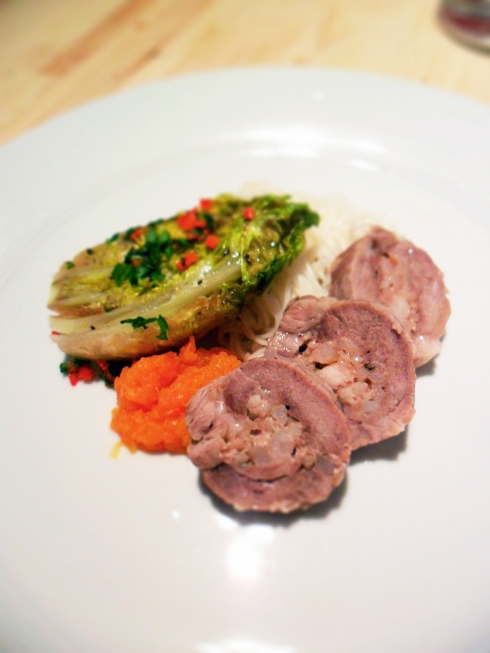 Alright, so maybe pork isn’t so appetising in a ballotine. In any case, a drizzle of sesame oil elevates its flavour immensely. Served with ultra-thin rice noodles, carrot mash and seared lettuce, I am definitely playing with my food.

French-style cooking and Asian flavours, at its best.

To all those overseas who crave the good ol’ Tze Char Noodles, I’d like to share this recipe with you. It’s not exactly the same as what you’d get for cheap in the neighbourhood restaurant you frequent weekly back in Singapore, but it’ll serve to satisfy your cravings. 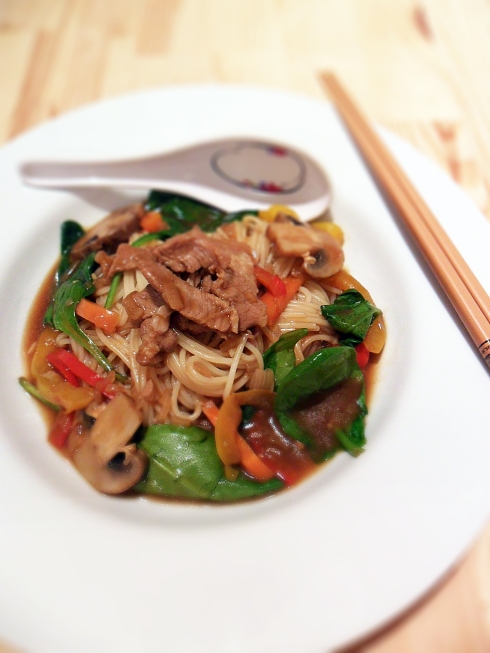 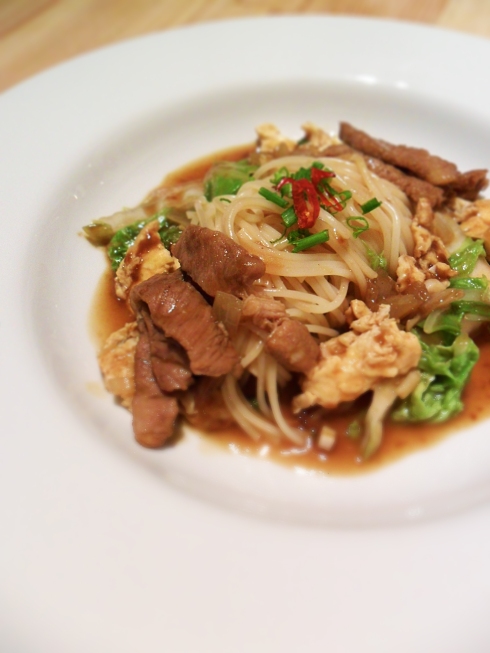 It’s been a while since I’ve been back to Singapore, and aside from many other things, I miss the food there. I thought I was dealing fine with the abstinence of Singaporean cuisine, until I was reminded of my beloved Fried Hokkien Prawn Mee. My stomach grumbled to the rhythm of the words as they entered my ears. No, I’m not talking about the black sauce variant from Kuala Lumpur.

I’m talking about this: 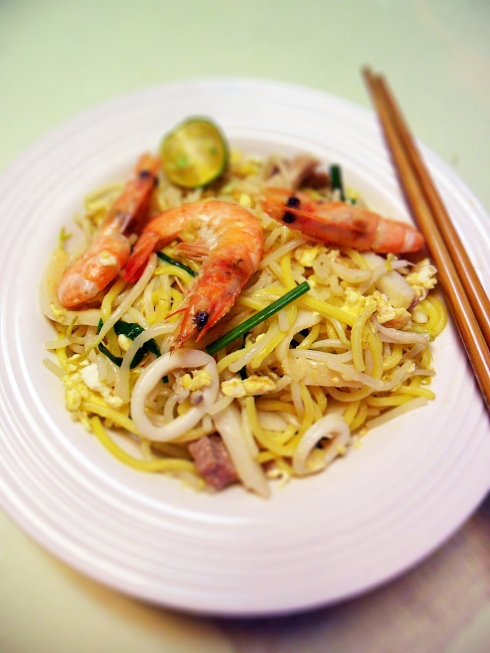 It’s far from anything you’d get in the hawker centres back in Singapore, but it’ll do. Craving, momentarily satisfied.

If you wanna make a Chinese Stir-Fry and have no Asian egg noodles in your kitchen cupboard, then spaghetti or linguine works just as well. Just make sure you have all the essential ingredients:

Pork is usually my meat of choice for stir-fry ‘cos for some reason, I think it tastes the most Chinese. Onions, mushrooms, shrimps, egg, spinach, beansprouts, chillies, even cheese is up to you. Whatever makes you happy.

Garlic and ginger, almost like the yinyang of Chinese Stir-Fry.

I was blog surfing just yesterday and I came across gninethree‘s entry, when all of a sudden, my Singaporean taste buds started making a ruckus in my mouth. They demanded some Bak Chor Mee. To translate, it’s Minced Pork Noodles, a true blue Singaporean pasttime.

With whatever I had in the kitchen, this is the best I could come up with: 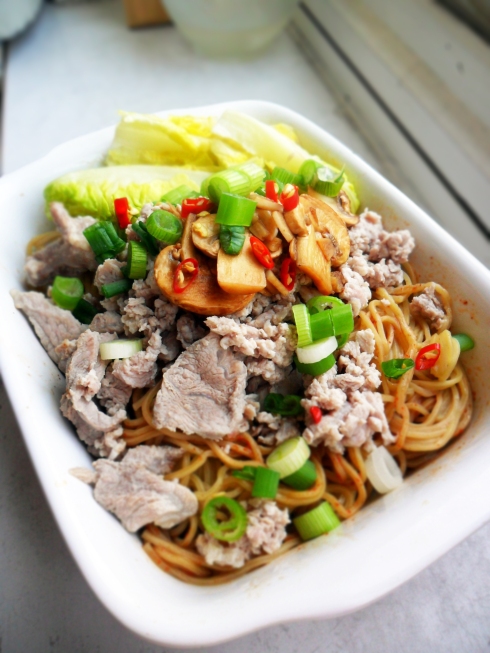 Slice some pork and mince the pork yourself; pork shoulder’s the ideal choice. If you have a couple of slices of pork liver, that’s awesome. As for the mushrooms, (obviously) black oyster mushrooms are best. But what’s crucial is slow cooking them in garlic, dark soy sauce and a little oyster sauce. LUSH. Along with fresh lettuce, beansprouts are a huge plus, which I didn’t have. :/ Finally, the all-important Chilli Padi.

P.S. Fried lard is a bonus. 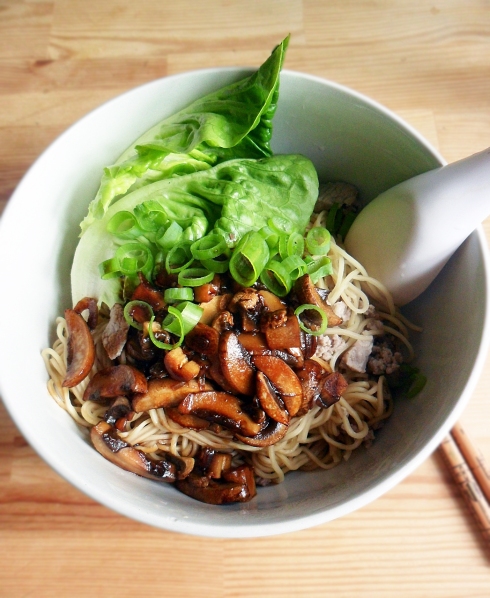 With all this, the taste of Singapore’s not that far away. (:

Had a late night on Skype yesterday and hence, a Good Morning-turned-Afternoon today. :/ I woke up feeling terribly hungry. I needed food, and I needed it FAST.

Then, I remembered having a new bag of Taiwanese Yellow Noodle Sticks, which I got from Chinatown last month. :D 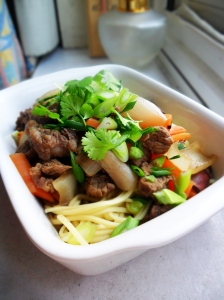 I can’t guarantee it will taste very good the first few times.
But with practice and sheer hunger for good savoury asian-tasting food, you’ll get it soon enough. (: